Biological dentistry, lasers, ulcers and hypersensitivity – What do they all have in common? 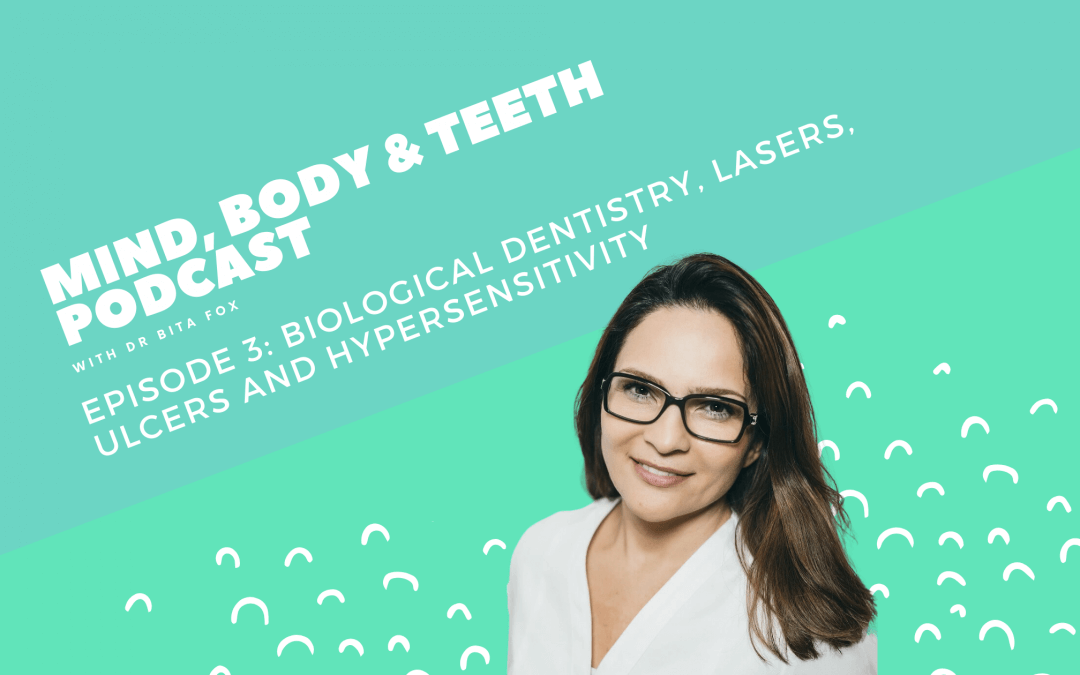 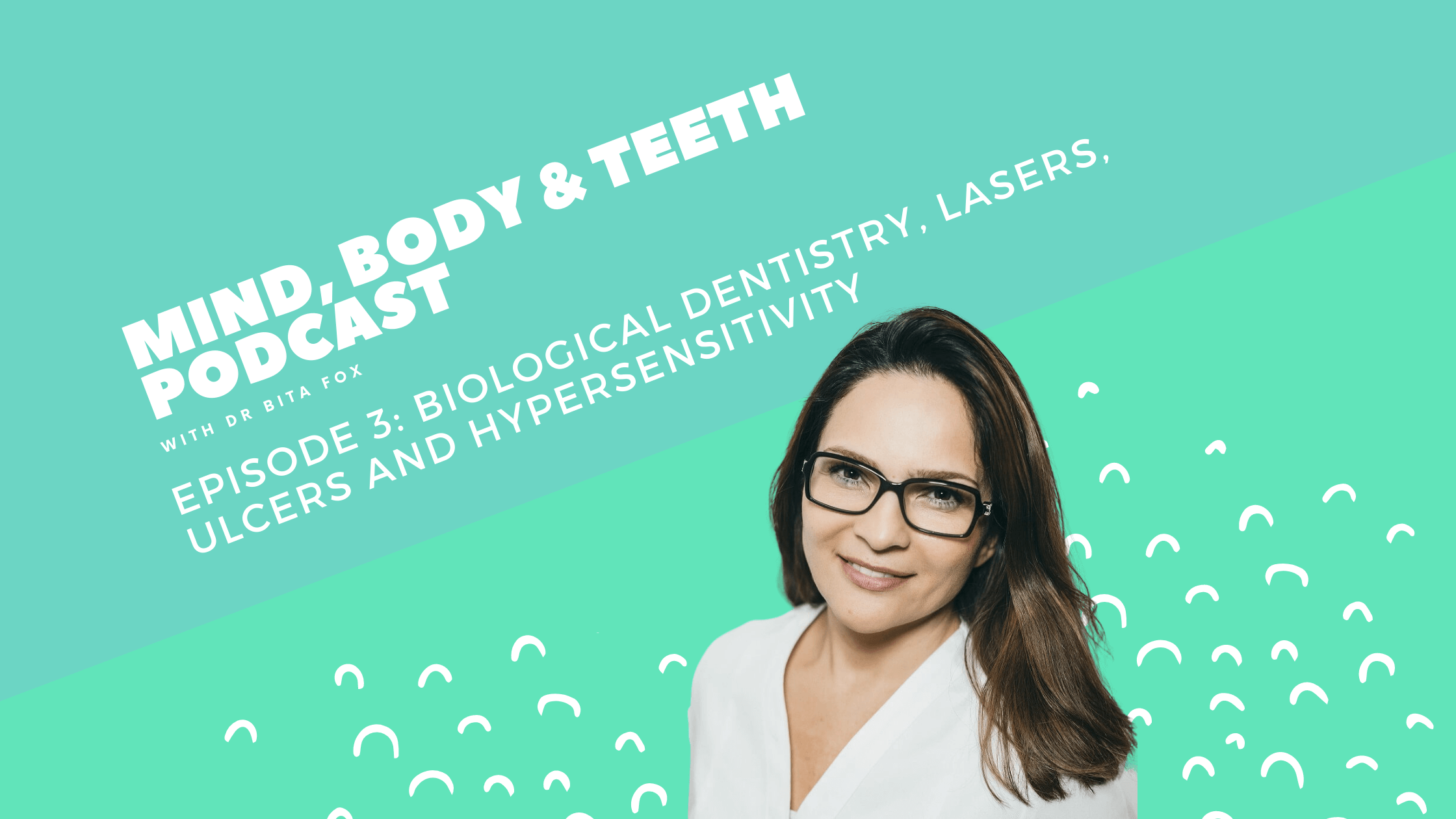 Please consider subscribing from wherever you listen to your podcasts, this is where you can find us on all major pod cast providers.

Hello, and welcome to the Mind, Body, and Teeth podcast. In this podcast, I’m going to talk about lasers. If lasers were a person, I would be referring to them as a multitasking, multi-talented person. They have been widely used in the aesthetic industry, for instance, for many, many years quite successfully. They have been used by chiropractors, for instance, for pain and inflammation, especially in the U.S., perhaps, but in dentistry, perhaps not so widely known or so extensively used.

Chiropractors have been using lasers for pain relief for many years. Especially in the U.S., this is a common treatment modality to approach pain and inflammation. In dentistry, it might not have been used quite for as long or as commonly, but it’s gaining more and more recognition.

Professor Steven Parker, for instance, or Dr. Mark Cronshaw are very much interested in lasers and what it can do, and they are researching it and writing papers on the topic. These are just two UK-based dentists that are quite well known, and that’s why I mentioned them. What’s more is that they are performing very much science-based studies and therefore quite substantiated knowledge and lectures are shared by them.

The aspect of laser use in dentistry that I will be talking about is photobiomodulation, which is based on photobiology, which in effect is the phenomenon of photobiology, i.e., the interaction between non-ionizing radiation or light of a specific wavelength, if you like, and living tissue. In this case, it’s a 945-nanometer diode laser applied to achieve pain relief of inflammatory origin or to achieve optimal post-surgical healing. Delivering, of course, in correct dose is key.

I will speak about photobiomodulation in more detail. However, I would like to talk about the anecdotal experience that I have had so far with this diode laser, and it’s the example of a case report whereby I operated on one patient who happened to need surgery in all four quadrants, basically both sides of the mouth and each both upper and lower, which then makes up four quadrants. I performed surgery on this patient in this three of these quadrants in a conventional manner, and then I performed a similar kind of surgery that was needed on one side of the mouth, one of the quadrants, with a laser. And the result was quite phenomenal. The difference was in the three quadrants where the surgery was performed conventionally, the swelling and the pain was as expected post-surgery, as in after surgery, there was a level of pain and swelling, and this was of course expected by myself as well as the patient, as we had thoroughly discussed this before surgery.

Now with the laser, what this patient reported was that there was no pain, no swelling after the surgery, and all she could describe was there was a strange kind of taste or smell, which she couldn’t quite define what this was and that this was sort of the only difference. All in all, she described it as very successful, and if she was to choose, she would’ve chosen the laser for all four quadrants.

Lasers have a range of different uses, depending on what spectrum within light it applies and functions in. The laser that we use at Munro Hall Clinic is a diode laser, which operates within the range of infrared light, or closed to infrared light, I should say. This means that it operates very, very effectively in something called photobiomodulation, or also called low-level laser therapy. And what is this used for?

What can we accomplish with this amazing laser?

Well, we can use it for many things, actually, and that can be to enhance healing and reduce pain after dental surgery, after extractions. We can also manage pain after such treatments, so not just healing but also if someone ends up with pain, temporomandibular joint problems, and pains and treatment of sensitive teeth, which also is called dentin hypersensitivity, which can sometimes be a result of receded gums, for instance, or healing of mouth ulcers, for that matter.

So how does laser and PBM, photobiomodulation, therapy work?

Well, put very simply, the cells in our body require oxygen, as we know. If the cells become damaged or stressed, for instance too much sugar in our diet, too much sun exposure, cigarette smoking, too much alcohol intake, many, many things like that, then your body has a tendency to produce a free-radical molecule called nitric oxide. Unfortunately, our cells have an affinity to nitric oxide, and that attaches instead of attaching to oxygen. This means the cells have less oxygen attached to them, and they are unable to function properly. They can’t function as they’re meant to be functioning.

This can then start a chain reaction to produce more volatile free radicals in our system. These are called generally reactive oxygen species, also shortened ROS. When light within the correct spectrum of color and intensity, such as the diode laser, is applied to the area, it causes vasodilation, which in effect means the vessels dilate. They become wider and more permeable. This then allows the oxygen to attach to the cells instead, resulting in less stress on the cells and allows normal function to resume. Every cell in our body has thousands of mitochondria, which are the primary receptors for light. If light is applied to the stress cells at the correct spectrum again, then those cells can benefit due to the increased circulation and oxygen present.

It is this respiration, mitochondrial respiration, that is so well enhanced, that it also is to cellular regeneration, hence better-improved healing so cells can regenerate in a far more beneficial way than without the laser therapy.

So how does this laser work for something as simple as dentine hypersensitivity, which relates to short, sharp pain resulting from cold air, for instance, or ice cream or cold beverage intake?

Most dentists are aware of the hydrodynamic theory which relates to resulting in short, sharp pain as mentioned arising from exposed dentine. The triggers can be tactile, i.e., from pressure, temperature-related stimuli such as hot and cold, or chemical stimuli such as from biting into a sour apple, in which case probably a bit of all the stimuli mentioned would apply.

We usually see dentinal hypersensitivity as a result of gum recession, for instance, as the root of the tooth becomes visible, although the sensitivity may occur even without gum recession. Whenever it is due to gum recession and therefore exposed dentine, the crown of the tooth is longer, and the yellow bits that’s exposed that will be related to the root being exposed. And the wider part is the enamel, which is generally not the part that tends to be sensitive.

Why gum recession occurs is a whole different topic that can be discussed another time. However, it is important to establish the reason for why this hypersensitivity occurs. As the diode application onto the tooth surface increases the tooth temperature from within the tooth, it causes the dentine tubules to fully, or at least partially, close up on the surface as the dentine structure recrystallizes, thus breaking the pattern of pain conduction along the nerves. Now, we may require to see you as a patient a couple of times for this kind of treatment. So it may improve a little bit after first session and far more after the second session or the third session.

But the point is that this is sensational because usually any kind of other treatments tried and tested in dentistry have only been temporary solutions, and the sensitivity returns fairly quickly. And it may involve high-dose fluoride applications, which many of us holistic dentists are opposed to, or perhaps the application of resin. And that, again, the effect is not very long lasting, whereas this laser treatment really seems to be working quite a bit longer. And so we are very pleased with this, actually, and other treatment modalities would be treating and curing ulcers. I should perhaps not call it curing but reducing symptoms quite substantially and healing occurring far quicker than without laser.

Now it should be pointed out that…

…ulcers that occur in and around the mouth can have different origins, different causes.

An estimated 3.7 billion people under age of 50 are infected with herpes simplex virus, for instance. There’s herpes ulcers, which are highly contagious, while the patient is symptomatic usually, and there is also aphtas ulcers, for instance, which are non-contagious but ever-so painful equally. It is unknown why they appear, although stress has been reported to be a trigger, just as with the herpes ulcers, cold sores as they’re also called.

But also some vitamin deficiencies, such as folate, B12, and iron deficiencies have been reported to be related. Benefit of using laser as opposed to antiviral medicines, especially systemic antivirals is that the treatment with laser is very much localized, effective, and immediate, well, almost immediate anyway. The mechanism of action is that the laser energy kills the virus and modifies the nerve endings, thus causing symptom relief.

A few reasons for why one would want to treat cold sore is because it is quite contagious. But in fact, if it spreads to the wrong places, such as the eyes, it can actually cause blindness, so it can be quite serious. Spread of infection can also cause encephalitis and death in babies, as for a reason like that, and so it should be taken quite seriously. But one of the very good reasons is also that it reduces healing time to two, three days rather than the usual ten days.

The mechanism of action is that the laser energy kills the virus and modifies the nerve endings, thus causing symptom relief. A few reasons for why one would want to treat a cold sore is because it is quite contagious. But in fact, if it spreads to the wrong places, such as the eyes, it can actually cause blindness, so it can be quite serious.

Spread of infection can also cause encephalitis and death in babies as for a reason like that, and so it should be taken quite seriously. But one of the very good reasons is also that it reduces healing time to two, three days rather than the usual ten days. All in all, I am very pleased to say that Munro Hall Clinic will carry on offering this type of treatment modality, lasers assisting existing treatment modalities, supporting the treatment, and improving healing outcome. Lasers are now offered by both the dentist as well as the hygienist at Munro Hall Clinic.

Thank you and see you soon. I’ll speak to you soon in our next episode.

Munro Hall Clinic  »  Podcast  »  Biological dentistry, lasers, ulcers and hypersensitivity – What do they all have in common?